Voice Commerce will Continue to Grow

You’re probably wondering. “Voice commerce!? What in the world is that!?” – and if you’re a business owner, you’re dialling up your marketing person ASAP to ask why you aren’t doing it. Well, no reason to panic just yet!

13% of Smart Speaker owners made purchases through voice in 2017. 55% growth in voice search is predicted by 2022. Voice commerce is also one of the emerging eCommerce trends of 2020.

Was that a tip? On the way to figuring it out? Well, the answer is easy – and in fact, the answer may be sitting on your kitchen counter right this very moment.

We’re talking about smart assistants, particularly Alexa. It has become easy for prospective customers to simply ask the device sitting on their counter to order something, play a song, or book a service – and, well, it does so very efficiently.

Why are these tiny little, somewhat creepy, speakers so important?

“Ok, that’s impressive, yes, but what does it say about buying habits?” Well, here’s some more information on that aspect!

Thanks to Wordstream for statistics. 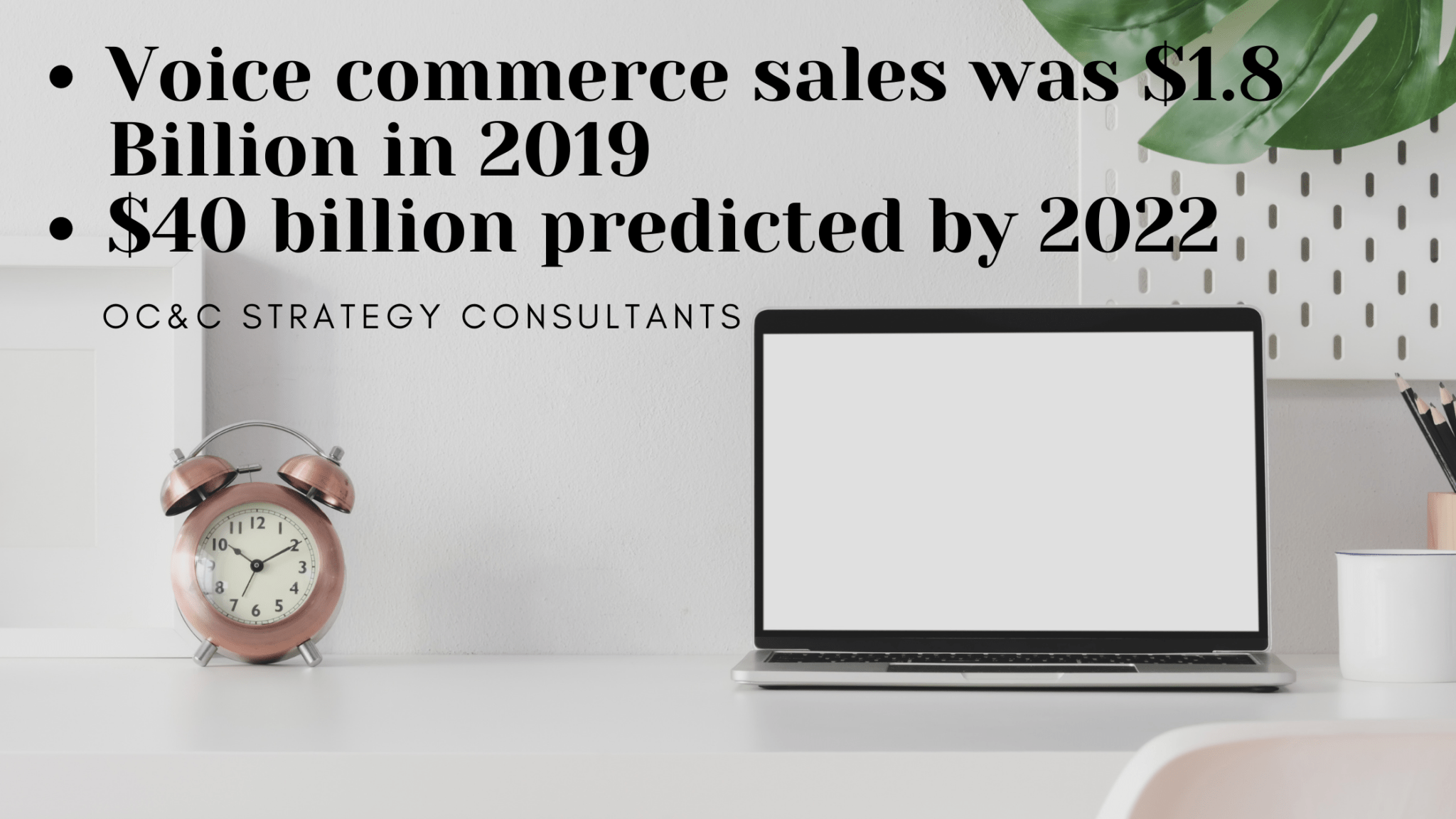 All of us internet citizens heard the funny story last year of Alexa ordering a young girl a dollhouse after she innocently and politely asked her to. In fact, that blunder leads to a second, with televisions causing accidental orders of the dollhouse and news reporters laughed about the story around the world! There have even been cases of parrots ordering random items from repeating words that they have heard.

By the way, did you see the Burger King commercial? No, we’re not pushing fast food on this blog, this is an actual fiasco! A Burger King commercial in 2017 aired featuring a young worker saying “okay, Google…” causing devices to instantly listen up. On this listening up, they would orate from the Wikipedia page for the Whopper. While this worked for a little while, internet trolls quickly found out about the ad, and of course, had a field day with the concept.

How about Alexa, our favourite digital assistant?

2017 Alexa statistics show that the huge Echo sales were driven by Black Friday, Cyber Monday, and Amazon Prime Day online sales, among others. By the last quarter of 2017, the total number of units sold went up to 21.5 million. For comparison, about 1 million non-Echo smart speakers with Alexa built-in were sold in the third quarter of 2017 as well.

According to Amazon Alexa statistics, 2018 was indeed a busy year for Alexa. Although the company didn’t reveal the exact numbers, they claimed that tens of millions of Amazon Echo products have been sold and the number of people who own multiple Echo devices increased two-fold. Another impressive, yet fun, fact: Alexa has told over 100 million jokes in 2018 alone.

That said, Amazon had a market share of 36.6%, whereas Google had only 12.3% of the pie — a huge 40% drop in its smart speaker sales from 2018. The latter only managed to ship 3.5 million units globally. And, as Google spiralled downwards, Chinese brands such as Alibaba and Baidu reached new highs, accounting for 13.6% and 13.1% of the market pie, respectively.

This number is rather small if we factor in the forecasted smart speakers’ market reach of 172.4 million US consumers in 2022. Nevertheless, experts believe that Americans would be leaning more towards smart devices; they expect that over 26 million households will own other smart devices besides smart speakers in 2022 as well.

As already stated, voice commerce is just one of a number of the new eCommerce trends we are observing in 2020 which will persist in the coming years.